Barnsley Football Club legend Neil Redfearn has retired from the playing game at the grand old age of 41. Redfearn had been a cult-hero at Oakwell over the eight years he spent at the club, one of which was spent in the Premiership.

He has retired to focus on his managerial career. He has already had managerial experience at Scarborough, albeit not a very successful spell which saw Scarborough relegated to Conference North. He made his 1000th competitive appearance on 4 November 2006, when Bradford Park Avenue faced Solihull Borough in the 2nd qualifying round of the FA Trophy.

Redfearn is considered possibly one of the best players ever to pull on a Red shirt and it is expected to see him back at Oakwell, maybe as manager, assistant manager or coach...who knows? But what we do know is, Neil Redfearn has led a very long, successful and brilliant career. 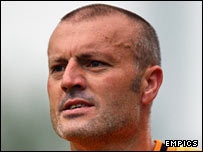