The Yorkshire Post has today reported that stab victim Ronnie Wallwork will return to Barnsley on loan after being stabbed in a Manchester nightclub in November 2006.

Ronnie made two Tykes appearances, those in the 1-0 and 2-0 wins at home to Ipswich and Southend respectively. Does that tell you something?

The West Brom midfielder came back to football after surgery in a reserve game in the week. He also revealed some months ago that he would play for Barnsley again 'in a heartbeat'.

Meanwhile young Reds defender Ryan Laight has returned to the club after his loan spell at Conference side Tamworth. He broke his toe and has had his loan contract terminated by mutual consent. 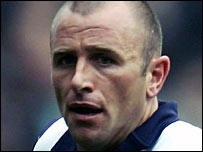